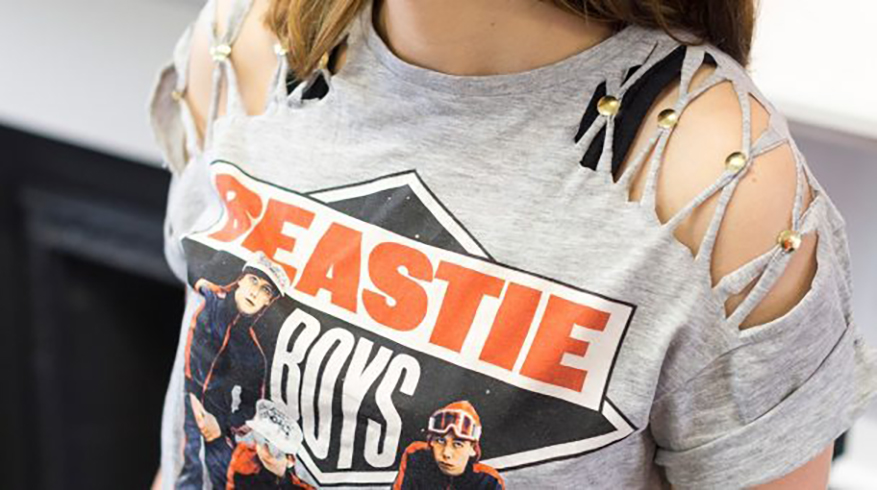 Here at Kaizen Brand Evolution we are big music and fashion fans, so are eager to participate in this year’s ‘Wear Your Old Band T-Shirt To Work Day’ by Radio 6 on the 25th November.

We have our tees picked out, pressed and ready. It’s sparked a debate on our favourite albums that go with them, here’s an insight into our eclectic studio taste.

Ryan: Album – ‘Down in Albion’ by Babyshambles

I kept this t-shirt as a memento to this epic gig! I had a pint with the band before their set, lit one of Pete Doherty’s cigarettes for him while he was on stage and appeared the next day on page 3 of the Irish News (which I still have) with Pete Doherty and Kate Moss on a feature about the band playing in Belfast.

‘Down in Albion’ is no doubt my favourite Babyshambles album. When I hear ‘Killamangiro’ it brings me back to my old student flat behind Auntie Annie’s where my mate and I started the band ‘The Couth.’ I’m still a massive fan of Babyshambles and the Libertines!

Painted by band member John Squire, the style harking to Jackson Pollock and the May 1968 riots in Paris, the chaos in the picture is balanced with the subtle placement of pattern that can be found in Squires current artworks. It’s my favourite, so much so, that my birthday present to me was the jacket. The chaos symbolises their handling of later events in their career, decorating those who had wronged them, homes and offices in paint, as “that’s the way people deal with things in Manchester”.

One of the first things a Roses fan will ask you when you meet them is, “first, or second album?”, I’m in the first camp, with ‘I Wanna be Adored’ still giving shivers.

I’m choosing the Phoenix Park T-Shirt over the classic ‘Lemon’ due to typesetting, I love green, and my friends and I got pit tickets and we were so close we could have licked him!

Shaleen: Album – ‘The Script’ by The Script

I listen to quite a lot of different music so deciding on a T-Shirt for Band T-Shirt day was quite difficult. My favourite bands would be Maroon 5 and The Script, who have the advantage as I’ve been to see them live in concert. One of my favourite songs would ‘The Man Who Can’t Be Moved’ but I generally love most of their songs. But I also love older music bands like The Beatles and Queen.

Vicki: Album – ‘Ill Communication’ by Beastie Boys
I don’t listen to that much music these days unless you count movie soundtracks. I don’t have that many band t-shirts (always too pricey for me, who loves a freebie!) In saying that, I still have and love my Calling tee. I was obsessed with them as a teen; finding out Alex Band was related to Charles Band, director of the ‘Puppet Master’ horror movie franchise, only made it worse! For the big day though, I have acquired and repurposed a Beastie Boys Tee, which you can see how here  here. I wasn’t as big a fan when I was younger, but finding myself really enjoying their music as an adult.

Lizi: Album – ‘Spice’ by Spice Girls
I haven’t really been a music lover or a groupie and loved one particular band and any band that has been cool and hip. I have always just liked any music just by the song, so picking my favourite band for band t-shirt day has been hard. I just go with the flow when it comes to music!

When I was little I always wanted to be part of the Spice Girls (I know, cool right!) Sporty Spice was my favourite and I knew every song and dance move there was!