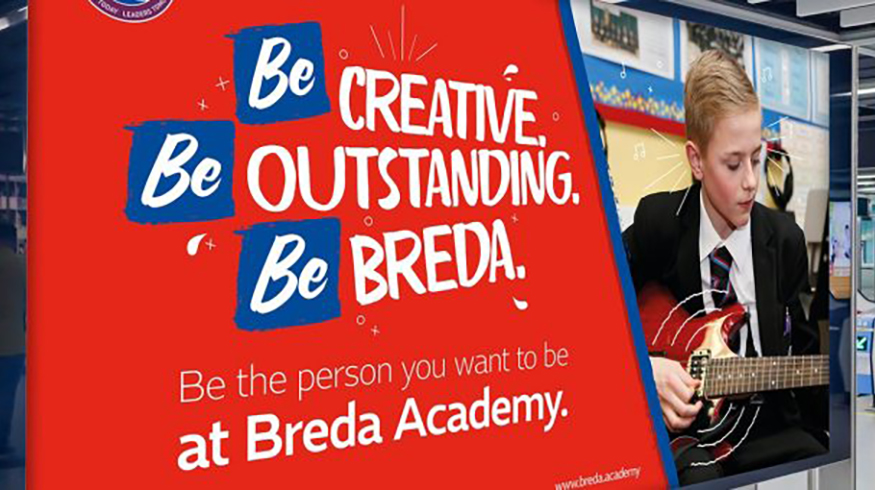 Breda Academy required a fresh brand identity to set them apart from their competitors as part of the 2017 marketing cycle. Breda approached Kaizen Brand Evolution to create a refreshing brand campaign that spoke to their three key audiences, future pupils, parents & teachers and returning 5th-year students into the Upper Sixth. In order to communicate at all levels, we needed a campaign that not only looked appealing and engaging but one that spoke to all levels in this audience. We aimed to set Breda Academy at the top of the picks at Primary School level and retain Fifth Year students as they move into Upper Sixth, giving a platform to the outstanding added value Breda Academy offers. For instance, Breda Academy are one of the first school’s to supply 1 to 1 iPad’s to years 11-14 embracing the future of tech in Northern Ireland, this is the tip of the iceberg really. With such fantastic facilities available and the obvious dedication of the faculty, we wanted to create a campaign that showed the vision of the school and the potential of the pupils conveying the idea that anything is possible at Breda Academy. Using this model we created the ‘BE’ campaign. We used the ‘Be’ from ‘Breda’ as the verbal brand device across all campaign materials. The ‘Be’ campaign is primarily used in a stack of 3 positive, inspiring pieces of copy, the overarching message being “Be Inspired, Be Outstanding, Be Breda.” The Be device quickly became the driving force behind the campaign roll out, signage, way-finding systems, marketing collateral and online campaigns. Breda immediately realised the value in such a versatile campaign. Plans to roll the campaign out across the next academic year have already begun.

With the campaign title established we set off to create the visual aspect of the identity. We created an illustrative type style and brand iconography that truly reflected the students potential. Each campaign is carefully crafted to showcase each particular offering, for instance, the sports day imagery features a pupil jumping over hurdles on a racetrack, to this photography we introduced illustrations, adding another level of engagement with the “Be” campaign, we drew a cape on the pupil with motion lines, stars and all sorts of exciting doodles. This was, in fact, a sticky point in a meeting with faculty, they had expressly asked pupils not to deface any books or property recently and this style almost looks like a pupil has drawn over the imagery in pen! Which in turn was a fantastic way of relating to the pupils.

We added a secondary colour palette to the Breda Academy guidelines, which acts in tune with the core blue and purple. We use the secondary colour palette to house the brand messaging in the illustrative/sketch style adding another level of engagement alongside the photography and copy. With small incremental changes like this, the Breda Academy brand has a new lease of life. We also developed a new set of Brand Guidelines for the school to be used accordingly for any internal documentation or presentations to pupils.

With the new identity, we have started to release advertisements, flyers and marketing material to begin the campaign cycle, creating buy-in from current and potential students, and spreading the brand awareness with this fantastic new brand identity. Firstly you may notice the new brand roll out in the likes of Ulster Tatler magazine, Belfast Telegraph and the Open Evenings at Breda Academy in early 2017. We are incredibly proud of the final project and will continue to work with senior faculty members and marketing team in the development and evolution of each campaign and piece of branded material. Be Inspired, Be Outstanding, Be Breda.